“My Passion is Cooking and Baking.”

Born in Yonkers and raised in the Bronx, Suzanne Hesselson moved to Elmira in 1976 with her husband and Elmira native Tom Hesselson. Suzanne had dreamed of having her own restaurant, but instead, she formed a catering committee with fellow members of Shomray Hadath Synagogue, Loda Golos. Together, they made food for events at Congregation Shomray Hadath and Temple B’Nai Israel, serving food and making money for the Jewish community. When the Sisterhoods of both Jewish congregations collaborated to create the Jewish Food Festival in 2009, Suzanne was asked to help, and she quickly became the leader of the bakery team.

On Managing the Bakery for the Jewish Food Festival:

“So then when the food festival came up, I was asked to come in and be part of the committee. I don’t even really remember, but I remember saying, well I’ll do the bakery. You know you’ve got to have a bakery. And we came up with Bubbie’s Bakery, but in Yiddish, Bubbie means Grandmother. And in the old Hester Street days, that’s what they spoke mostly, was Yiddish, not so much Hebrew. And I was recently a Bubbie – a grandmother – so that’s how the name came about. And it just grew. The first year we made twenty five challahs and you know five babkas, fifteen babkas – we sold out in an hour, hour and a half.”

Suzanne’s passion for food is deeply embedded in her Jewish identity. Though she was not particularly religious growing up, she found a passion for Judaism and cooking while working on a kibbutz in Israel as a young woman.

“It actually started in Israel when I was on Kibbutz. I worked in the kitchen. And I just was – I don’t know, they’re cooking for thousands of people, depending on what kibbutz you’re on. And I worked in the kitchen as one of the jobs, and I just became very interested in it. My mother never cooked. If you didn’t open a can, or you didn’t broil it, she didn’t know how to make it. She never cooked. In those days it was just canned vegetables not frozen. And I don’t know I just started experimenting. I loved baking bread [….] I just taught myself. Went to classes in New York. And Always said I wanted to open a shop. But I think this community has given me that purpose, and I feel very good about it. So it’s just grown with me, the catering committee and trying different recipes. I make it for my family. And they love it.”

Yeast breads are Suzanne’s particular love. Here, she describes the aspects of the baking process that she finds most exciting, and how she has honed her technique over many years:

“Well bread – I love the whole process of. You make the yeast and you watch it rise, and the smell of the yeast. Watching the chemistry of the gasses. And then it comes into this beautiful bread. So I really do enjoy that. Over the years, I’ve tried many recipes to get to where I am, and this is the one that I really like the most – the challah that I make here. And in fact we’re doing this year – for Rosh Hoshanna and Yom Kippur, we are going to sell them for the holiday, and we’re going to make them round.”

Some of her baking is influenced by memories of the foods and institutions that made up her Jewish childhood in New York. One particular bakery, Ebingers, held the memories of stolen indulgences and influenced a recipe Sue used for the Jewish Food Festival:

“This year I added crumb buns, which is a form of babka. It’s also a yeast. And that was something that I grew up with, in New York. And it’s not crumb cake, so it’s very different. And I looked and looked for recipes. And I found Ebingers, which was a big bakery in Brooklyn, Very famous. Had Blackout Cake. Kosher. You know it was Jewish. And I found their recipe, so that’s the one we use [….] we used to go visit my grandparents in Brooklyn, because then we were out in Yonkers. And my mother sent us one day and said – buy the coffee cake from Ebingers. And we bought it and then proceeded to eat the whole thing before we got home. And it was raining, so we told her we dropped it in the water.” 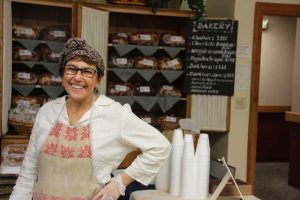 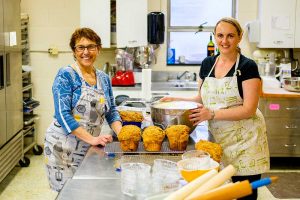 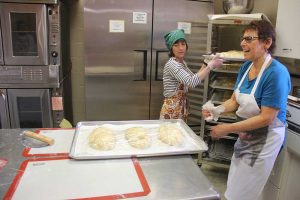 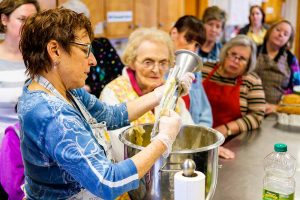 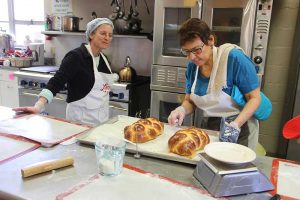 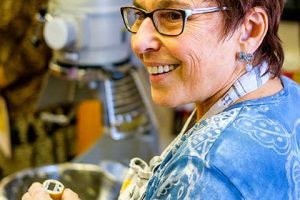 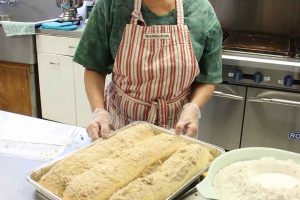 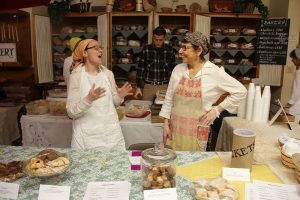 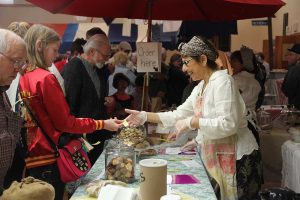 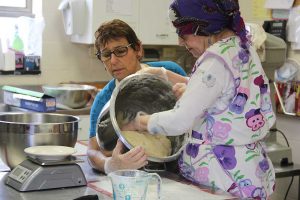 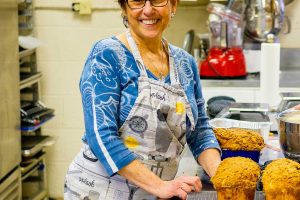 Sue King’s ancestors, the Gladkes, were founders of the first Jewish house of worship in Elmira

Sue King’s ancestors, the Gladkes, were founders of the first Jewish house of worship in Elmira

Warning: A non-numeric value encountered in /home/customer/www/sflxtraditions.org/public_html/wp-includes/media.php on line 467